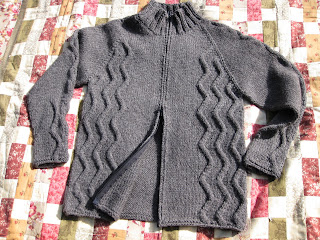 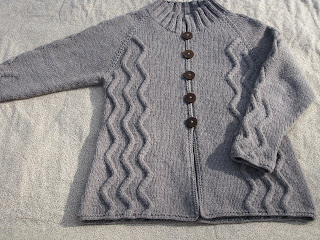 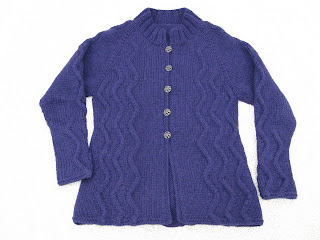 I'm very fortunate to have two young adult kids who enjoy wearing my knits. Perhaps I've just trained them to wear sweaters, but I like to think it's because I listen when they tell me what they want. When my son, James, announced that he really wanted a zip-front jacket, I cringed--in part because he would be leaving for the start of his third year at the University of Toronto in only a week, and in part because zippers really weren't my thing. I'd made the mistake of showing James the photo of Jared Flood wearing his version of Paton's Urban Aran. James thought he'd look totally cool wearing it, and I did too, but I had concerns:
1. James hasn't inherited his father's height; he's about 5'9". Respectable, even average, but sometimes it's hard to get sweaters to be an absolutely perfect fit if they're knit in pieces. The sleeves might be just a little too long. Ditto the body, and it's a major hassle to change things knitted in pieces, especially once you've started the sewing. I wanted a top-down design so that he could try it on as I knitted.
2. I also wanted cables, but not too many. The jacket had to be interesting to knit, but not too interesting to look at, because guys generally don't want to stand out.
3. I wanted to complete the whole thing in one week. I wanted a fairly easy, quick knit.
4. I was prepared to deal with the 2-way zipper, but I was determined to insert it in such a way that it would be easy, neat, and the teeth of the zipper wouldn't show. I'll blog more about the zipper insertion in another post.
Next, I thought about where James would be wearing his new jacket. The University of Toronto is broken down into colleges. James is a student of Trinity College. Trin's Strachan (pronounced Stron) Hall is a beautiful dark grey stone building in the gothic style. If you look closely up near the roof, you can see stone snakes zigzagging back and forth just under the eaves--at least, I think they look like snakes. So,the sweater was born in time for the first cool weather of the season.
While it was being created, I tried it on myself, just out of curiosity. I loved the way the cables made me feel taller and thinner (always a good thing), but I wanted room for my hips and a longer, more feminine silhouette. Soon I had a twin version for myself. I wore it with everything and everywhere, particularly when I went walking on the grassy heath along Sandridge Road near our then home in Ottawa.
Then, the Christmas season rolled around and Isabel, my daughter requested a version, but more fitted, please. She's very petite, even bird-like. So, this time I made the jacket fitted to the waist and found some ancient, Rowan buttons from my stash that looked unusually well with the purple heather wool Isabel had chosen.
Three sweaters, related, but each with its own personality.
Posted by Liz at 7:37 PM