Have you ever noticed how many good things happen little by little? For instance, I've been growing out my hair for the last year, from an insanely short style (as short as my son's) to shoulder length. I can now tie it all back. Alas, it doesn't make me beautiful, but it does make me look better (at least I think so) and it has the added benefit of being less expensive to maintain. (I'm also letting the grey happen--quite liberating!) The snow has been accumulating little by little too. I'm not sure if that is a good thing, but I know I'd like it if I were one of the cross-country skiers in the park. We've really had only one major storm, but there have been flurries almost every day. Because it hardly ever seems as though anything of substance is coming down, I hadn't realized just how much snow is out there until this week. Our window boxes have become mere snowy mounds.

Our patio table shows the full extent of the accumulation. 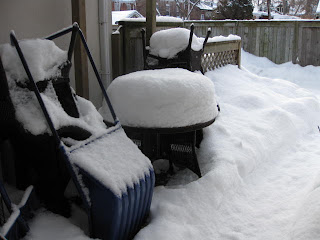 My knitting has been growing slowly too. My feather-light alpaca sweater is finally showing progress. It seemed as though I was knitting the body forever, even though the body is meant to stop at the waist and I'm knitting the fingering weight yarn at double knitting gauge. For a while I lost interest and started a sock. Then I realized that I was in danger of getting off track on what promises to be a lovely and useful garment. So, I got myself back on task by watching documentaries on my computer ("Mapping the World" and "The Story of Science", among others on TVO's site) and pausing every now and then to admire the airy texture of the work. 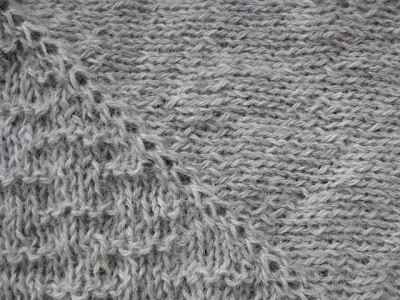 I'm on the first sleeve now and I can feel momentum building...
Posted by Liz at 8:45 AM