I'm assuming that anyone undertaking this project is not a novice knitter. To design your own aran sweater you really need to have already knitted an aran project and a few sweaters of any type. You need to be familiar with reading charts because you're going to have to create your own. Let's focus on resources first. I'm not including knitting stuff like ring markers and tapestry needles that you are likely to already have on hand.

1. Stitch pattern libraries  Over the years, I've collected a lot of stitch pattern books. These are so handy to have on hand, even if you don't intend to design sweaters. You can use them to locate simple stitch patterns to incorporate into socks or baby blankets or dish cloths. There are tons of pattern libraries available, so many that I'm not going to offer a list, other than to say that if I could have only one it would be the first volume of Barbara Walker's treasuries. It's an older publication in black and white, without charts, yet it remains a "desert island" book for most knit designers. Potter Craft's 400 knitting stitches is another nice book with charts (a little small and faintly printed) that I think is quite useful. I also like Wendy Bernard's stitch libraries, such as her Up, Down, All-Around stitch dictionary, which could be especially helpful for those unsure of how to represent stitch patterns in chart form. There are specialty books of cable patterns by the likes of Norah Gaughan and Alice Starmore (I took some aran classes with her back in the 90s), but let's follow the KISS principle for now. KEEP IT SIMPLE, STUPID.

2. Graph paper, lots of it  These days I simply have a free printable template bookmarked on my laptop for printing graph paper as I need it. And to go with the graph paper, pencils, an eraser, scissors and tape or glue.

3. A rigid measuring tool. Tape measures are good at measuring around your body, but mostly you're going to want to measure straight lines in your (blocked) swatches. I use one of those standard lock and hold metal measuring tools that you find at the hardware store -- you know, the ones that threaten to sever your fingers if you allow them to snap back too quickly. Like this: 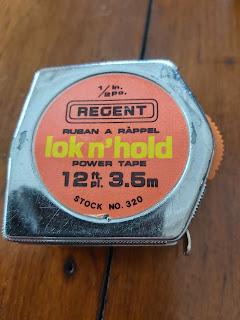 You could use a yard/metre stick instead, but it's not as convenient. A ruler simply isn't long enough.

4. Some means to mark your place in a chart. This could be as simple as sticky notes (what I usually use) or as elaborate as a knitter's magnetic board (I have one but seldom use it). The latter are available from numerous sources. The point is that you'll need something more than just a ruler laid flat to mark your row. It only takes a flick of an elbow for you to lose your place. It's true that it's pretty easy to find where you were from examining your work, but it's better not to have to bother.

For now, that's it. If I think of anything else, I'll revisit this post and add it on.

P.S. For anyone looking for a deep dive into Aran Design, I recommend Janet Szabo's Aran Sweater Design