We're in recovery mode here --from Christmas, from a ghastly cold virus my daughter brought home from university and shared with us, and from a really dreadful computer virus that knocked out our anti-virus software.
In spite of the cold, which has involved prolonged coughing fits around 2:00 a.m. each night, I managed to do the Christmas feast thing. We had a local organic turkey from Old Farm Fine Foods. It was one of their "small" ones, weighing in at 14 1/2 pounds, so I was happy to have James available to carry it home for me. I made stuffing, although I actually cooked it outside the bird, cranberry sauce, gravy, and our traditional melange of turnip (rutabaga for any American readers), onions, celery and carrots. No potatoes. There is a limit to how many calories one ought to consume at one meal. And how much work a meal should involve! And for dessert--vegan mincemeat pie. I'm not vegan, but this recipe is a little lighter than the traditional version since it has no suet and the pastry is made with canola oil. Yum. 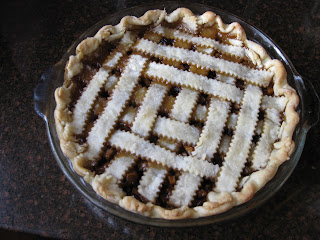 Yesterday, I discovered that our desktop computer had been taken over by a virus called "System Tool". It was really crippling since it prevented our normal security software from doing any scans. Eventually, I discovered how to go into "safe mode", download new anti-virus software, scan and eliminate "System Tool". I'm feeling brilliant at having solved the whole thing on my own, although I suspect most teenagers could have solved the problem in half the time.
Now, for a little birthday knitting. James was a New Year's Day baby. He'll be 22 next Saturday and he's requested a scarf. I'm knitting it lengthwise and I've cleverly (I think, anyway) cast on using Sally Melville's crochet cast on so that the beginning and the end will look alike. No photos yet. Perhaps tomorrow.
Posted by Liz at 8:59 AM