The Science of Knitting

I was browsing through the Winter bis issue of Knitty this weekend and admiring the stunningly beautiful cover sweater Sky Isle, when I read the bio of its designer. Here's what it says:

"Candace Joggerst is a PhD scientist working in computational astrophysics who lives on a mesa (an island-in-the-sky, of sorts) in Northern New Mexico. She has found that satisfying the urge to create real, complicated objects with knitting is far more portable and space- (not to mention finger-) saving than building furniture in a woodshop. Candace has been knitting for 20+ years, but only designing wearable garments for the past 2 years."

After reading this, not only did I feel totally inadequate, but I realized how many designers have science and math backgrounds. There's Lucy Neatby, who started out as a navigation officer in the British merchant marine and Angela Sixian Wu, the engineering student who designed my favourite tams (see below), and my friend Natalie Servant, whose engineering background has led her to design architecturally inspired lace shawls. I could name at least twenty other such women. Obviously, women with math and science backgrounds are attracted to knitting. This wouldn't surprise me except for the long-held notion that women innately have less talent in math and science than men. Remember the controversy that erupted when Larry Summers, then President of Harvard, suggested this?
But wait; not so fast Mr. Summers. A few weeks ago the results of the Pan-Canadian Assessment indicated that girls have now surpassed boys in science and are tied in math, at least in Grade 8. This leads me to suspect that women have always had strong math and science abilities, but that those abilities may have been utilized in ways not recognized by the formal education system. Knitting is a perfect example of this. Just look at old photos of gansies with their complex neck and underarm gussets and elaborate textures. Think of the spatial thinking skills required to knit those garments in one piece in three dimensions. 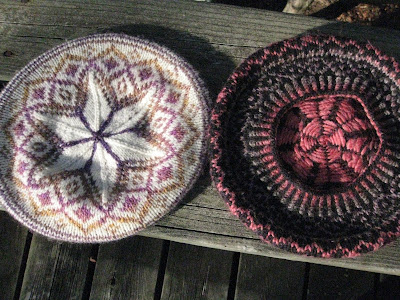 All of this makes me wonder whether if Elizabeth Zimmermann had been born a little later she might have been a rocket scientist...
Posted by Liz at 8:25 AM