Bill, my husband, is an economist who spent 16 years working in Washington, DC at the IMF and World Bank. Inevitably, the language of economics permeates his conversation. I, on the other hand, dropped out of economics in the second week of an introductory course. I have little patience with the way in which economists insist on giving complicated names to commonsense phenomena. So, it is with a bit of embarrassment that I am borrowing from the economics lexicon to describe how I spent yesterday.
The problem? I'm using a hand-dyed yarn with variations in colour intensity and I'm at the peplum. I have a choice. I can alternate between two skeins of wool, as I have done for everything except the collar, OR I can knit each of the two halves of the peplum with a single skein.
Benefits of the 2-skein approach: I won't have to worry about colour pooling and the peplums should blend in with everything else.
Cost: I will have to carry the yarns up the side or back of the work, and that will probably impact the appearance of the selvedge.
The reverse will be true if I adopt the 1-skein method.
I experiment. I try out some different methods of carrying the unused strands. This involves abandoning the slipping of the first stitch of each row. Naturally, I don't experiment on the actual project; I do it with a much smaller number of stitches. I take numerous photos of the process.

I'm finally fairly pleased with the result and I knit about 10 ridges (20 rows) of the actual peplum before I realize that, although the edge of the work is nice and tidy, there's no way it will match the second peplum, because the two sides are worked in opposite directions. In other words, the front edge of one peplum will have strands carried up (neatly), but the other front edge won't. They're both tidy, but they look slightly different. I rip it all out, then water the garden and walk to the grocery store for a breather.
I return to the task and decide to risk knitting the entire peplum from one skein, slipping all first stitches knitwise, as per the pattern instructions, to make a clean selvedge. The end result? 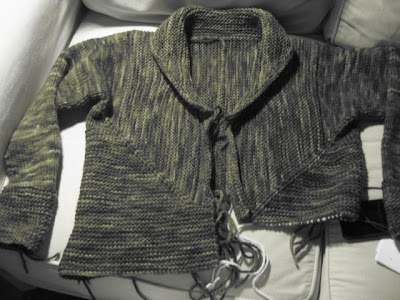 No significant colour pooling and a firm, tidy edge. Now, I have to figure out what's up with my camera settings...
Posted by Liz at 6:22 AM