After a couple of days of all-out spindling (to get this urge out of my system!), I'm ready to ply. Here's half the braid of Malabrigo's Nube spun into singles, then wound into a double-strand centre-pull cake/ball on my Royal ball winder. 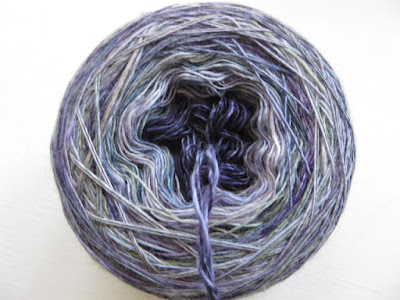 Now it's ready to be plied on a slightly larger spindle than I used for the original spinning. This is a good opportunity to say something about winders. My first wool winder was purchased in Washington, DC in the early 1990s. It was a Royal brand winder and cost a little less than US$25. I got it when I was embarking on my first Shetland wool project in the days when that product was still sold in skeins, not balls. At the time, I thought that winder was rather expensive, but necessary. It lasted 23 years. Less than a dollar a year! We were back here in Canada by the time it finally broke down. I called my LYS to see what it would cost to replace and with HST (our value-added tax) it turned out to be around CAD$75. Yikes. So I decided to cheap-out and try a Knitpicks winder. After all, I had (and still have) some Knitpicks products that I love, like sock needles and a lint shaver.
Turns out that decision fell under the old axiom of "penny-wise, pound-foolish". The Knitpicks ball winder was a struggle from the start. Unless I was very, very careful, the balls wouldn't wind properly. They would lose their shape, especially if the ball was on the larger side. I thought for a while that it might just be that I had a defective winder, but no, other knitters I knew had the same problem. As a spinner, I rely on my winder more than if I were merely a knitter. And, eventually I gave up the struggle. I chucked the Knitpicks winder into our plastics recycling bin, and bought a new expensive Royal. The two winders look almost the same, but the Royal is a reliable sturdy workhorse. It winds beautifully and effortlessly every time. Whew!
We are finally in the midst of high spring--vines back in leaf, pots of herbs on the front steps, 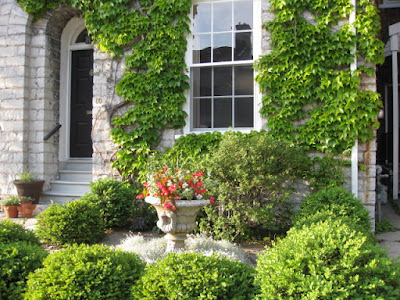 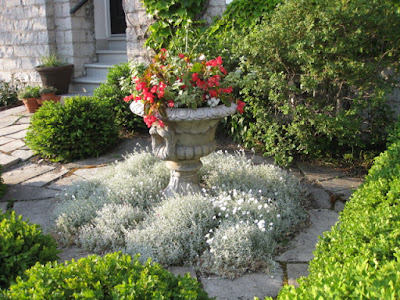 the world a warm (at least most of the time) and green place. Think I'll mix up some bread dough (this recipe) to rise while I finish up the plying.