I have a new obsession. It's the 18th-century "short gown", really a sort of jacket that was worn mostly (but not always) at hip length. It all started with this blog post about the rarity of finding an intact piece of work clothing from that era. In spite of this being a working woman's piece, look at the graceful shape, including the flared body and princess seams.

From there I discovered other interesting versions of this top, which like other work garments came to have more upper class versions, like this beauty.

The short gown even survived into the early 19th-century, when it evolved to have longer sleeves and a high waist.

A large part of my fascination with this topper is its method of construction. In an era when the greatest cost in garment production was the fabric, the short gown was cut all in one piece from one length of fabric, thus reducing the amount of waste yardage. At the same time, the lack of piecing meant that a short gown could be sewn in a relatively short number of hours. Here's an example of a pattern:

This construction method was a feature of both the working and dressier versions of the short gown, as were straight 3/4 length sleeves with turned back cuffs, and a lack of buttons. The jacket was either pinned closed with straight pins and then held in place with an apron, or in the dressier versions closed with ribbons or tapes. The essence of it is reproduced in this simple print version: 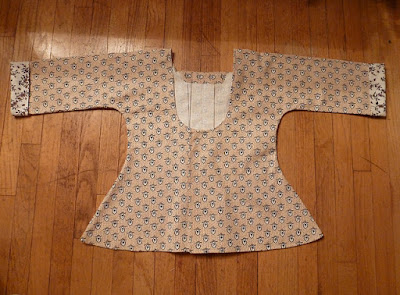 It's the combination of easy construction, practicality, and a graceful shape that catches my imagination and leads me to want to interpret this as a modern knitted design. That said, the very aspects that make this a straightforward sewing job make it less friendly to knitting, at least circular knitting. A lot of thinking is required. So, that's my challenge!
Posted by Liz at 12:35 PM