Although I'm definitely a monogamous knitter, there are times when I'm a sort-of two-timer. When I'm crunching numbers and slogging away to get a new pattern out into the world I often want some relatively mindless knitting to work on in the evenings while I stream something (PBS Newshour, Netflix, TVO documentaries?) on my laptop screen. In 2015 I posted a photo of some mittens I made to go with my Penelope Hat. 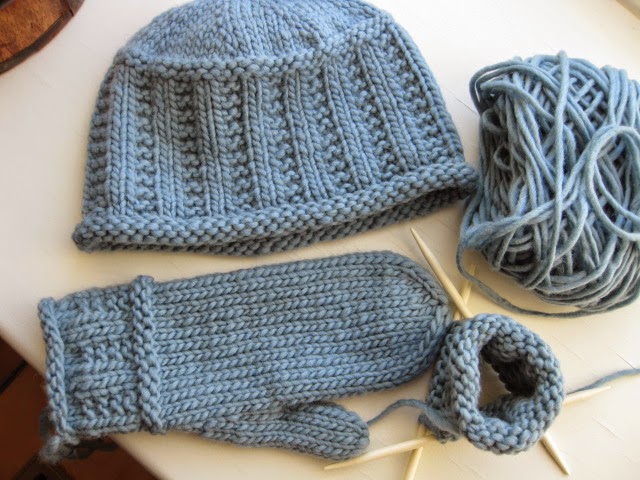 They've become my utility mitts -- you know, the ones for shoveling snow, wiping off the car windows, etc. They've shrunk a bit from felting, and that's a good thing because it's made them a bit more waterproof. My new night knitting project is to knit a new/extra pair and get the pattern out. As I wrote on that cold, cold February day back in 2015, they can be made in nothing flat, so maybe someone will enjoy cranking these out for themselves or a friend.
Unlike 2015, we are having a season that feels like perpetual November. Some pics from yesterday...

If you're in Ontario, were you too awoken by that accidental emergency alert regarding the Pickering nuclear reactor? At least our water is still safe to drink--for now.
Posted by Liz at 1:42 PM