Yesterday I got up early, packed a lunch, and drove for 2 hours to Ottawa. I was on a button quest. The buttons I originally had in mind for Trellis turned out to look a little too large when I laid them out ready to sew, and there weren't any others in my button box that fitted the bill. We don't have a really good source of buttons here in Kingston and, since I was going to have to drive to Ottawa, I decided to do a little stocking up. Here's the wall of buttons at Darrell Thomas. 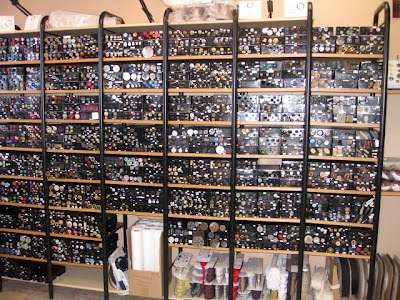 There were too many to fit into one photo. Wow! There was quite a bit of snow and ice in Ottawa and skaters were out in force on Dow's Lake for Winterlude. I didn't dilly dally though, because I had to fulfill my mission. After Darrell's, I hit Wool-Tyme Ottawa and Janie H. Knits on the way home. Here's a sample of my haul: 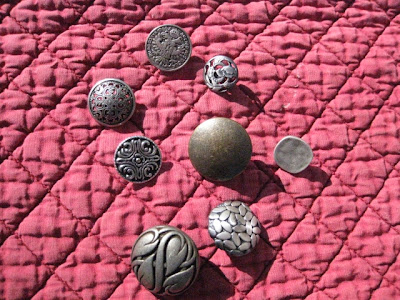 The one at the top is from Janie's and is the same as the ones on the cuffs of my Sydenham jacket. It's a reproduction of an 18th-century coin and, thanks to James, who identified the significance of the 2-headed eagle, I can now tell you that it is a reproduction of an Imperial Russian coin. Maybe a history degree does count for something after all!
Posted by Liz at 9:00 AM