In the dark ages of my knitting past, the task I least enjoyed was picking up stitches for borders and collars. Vests (or waistcoats, depending on your linguistic heritage) were the worst--not only neck and possibly front borders, but two armhole borders on top of that. Pick up hell! The patterns I used to follow always told me the exact number of stitches to pick up, and instruction books (this was the pre-internet era) explained how to divide up the border into inch-long segments with pins and then pick up a certain number of stitches in each segment. What, I wondered, was I supposed to do if I wanted to alter the length of the garment or the depth of the armholes?
Then along came Elizabeth Zimmermann and I was liberated from all this nonsense. Starting with her words of wisdom and with many years of experimentation, I've devised my own no-fuss set of pick up rules. Here they are, and I hope they will help you too to relax over this important aspect of finishing a garment. (Caveat: garter stitch is a separate category with its own rules. That's for another day.)

1. With a garment in stocking stitch or in a textured pattern (other than garter stitch), make sure you have one clean column of stocking stitch along the pick up edge. If necessary, add a stitch at the edge of an aran or other textured design to create a selvedge for picking up down the road. Knit this column on the right side, purl on the wrong side.
2. When it comes time to pick up, focus on the inside half of this outer selvedge stitch, this one here: 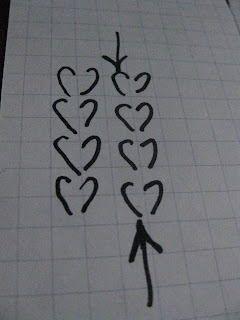 I hope you realize that although I've been using the term "picking up", what I'm really writing about is "knitting up". Starting at the bottom of the edge in question, poke the needle through the left half of the outer stitch, catch a strand of yarn and pull it through--one stitch "picked up" or "knitted up". You're not picking up the half stitches first on a separate needle and then knitting them later, and you're not sticking your needle all the way to the back of the work and picking up from there. There are some circumstances that might call for the latter, but in the ordinary course of knitting that would create too much bulk in the join between the body of the knitting and the border.
Example: In the double wave cable jacket I'm currently working on, there were two stocking stitch columns at the edge of the armhole, just as in the drawing above. I worked into the inner half of the outer column, leaving one column whole, right next to the sleeve. See? 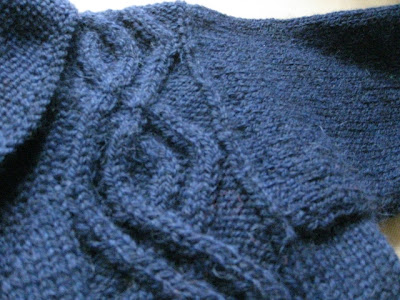 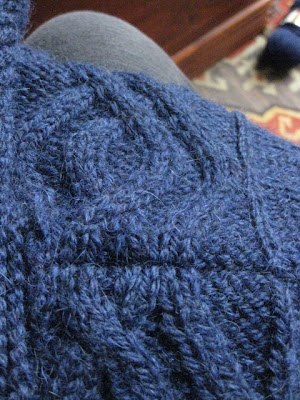 3. What about pick up ratios? On front borders I usually pick up 3 stitches for every 4 rows. On diagonal edges, like a V-neck I pick up every stitch. For armholes, I usually pick up 2 stitches for every 3 rows, even though the edges are straight like a front edge. I guess I like the armhole to draw in a little. Of course, if you have live stitches, as you might across the back of a neck, then just knit those live stitches. At corners, where there tends to be a gap, pick up the horizontal strand between stitches and work an M1 into it. Make such M1s lean toward the centre back (in the case of a back neck border) or toward the underarm ( in the case of a sleeve). Very tidy.
Sometimes you have to change the rules. For instance, on my Perth Cardi I picked up 3 stitches for 4 rows all along the long diagonal front edges to prevent them from drooping. The key is to remain flexible. If a particular ratio doesn't look right, try something else.
4.Oh, and generally, I go down one needle size for borders.
Questions? Thoughts?
Posted by Liz at 12:37 PM