Ready for Rhubarb ( a Saturday Recipe)

Here I am AGAIN writing up the Friday recipe on Saturday. That tells you I've had a busy week. It's still a little early for this year's crop of rhubarb, given that it's snowing (actually, the stuff coming down looks a lot like dishwasher detergent granules) as I write this, but not too early to be anticipating what to do with it. Rhubarb is rather an old-fashioned food these days. When I did a little background research on it here, I discovered that indeed, it reached the peak of its popularity between the two world wars. In this neck of the woods, it has remained quite popular for two reasons, I think. One, it grows like a weed, with no gardening skills required other than the ability to harvest the stalks once or twice during the season. Two, it is one of the first plants to be available for harvest in the spring garden. Unfortunately, since our move, I no longer have any to harvest, and until I do some planting, I'll have to rely on our city market. In Eastern Ontario, that's not a problem; it's reliably and cheaply available. It was quite another story when we lived in Washington, DC. There, I could only find it in exotic locations such as Whole Foods (at exorbitant prices, imported from Washington State), and my attempts to grow it failed as it tended to be unhappy in the hot, humid summers. I suppose that also accounts for the fact that there didn't seem to be the same cultural familiarity with rhubarb in general.
Although it is a stalk, rhubarb is treated as a tart fruit. The best tasting has stalks the colour of ruby red grapefruit. BTY, there is also an ornamental variety with ginormous leaves, which is amazingly attractive, if you happen to have the space for it. The regular variety can be made into jams (rhubarb-ginger is wonderful on scones), pies, or eaten stewed. In our household, we prefer plain rhubarb pies, without the often-added strawberries. Today, I'm going to explain how to make the stewed version. Warm stewed rhubarb is right up there with other simple, but heavenly tastes, like warm homemade applesauce.

enough rhubarb stalks to fill the top of a double boiler when chopped, and
sugar

Harvest the stalks by gently pulling them from the plant at the base. Remove the leaves, which are poisonous, and wash the stalks well. Cut into half inch pieces. It is easiest to do this with scissors. Fill the top of a double boiler with the chopped stalks and nothing else. Rhubarb is full of water, so much so that it can stew in its own juices. Fill the bottom of the double boiler with water, place the chopped fruit over it, covered, and simmer the whole thing until the fruit has broken down and is completely soft. Remove from the heat and add sugar (quite a lot will be necessary) to taste.
Serve plain, preferably warm, or with custard sauce if you have any.

I seem to remember that there's an Agatha Christie mystery in which the murderer uses rhubarb leaves as the source of her poison. Don't know the title offhand. Is rhubarb part of your spring rituals?

P.S. Just got back from my regular Saturday morning trip to the market. Here's part of my haul: 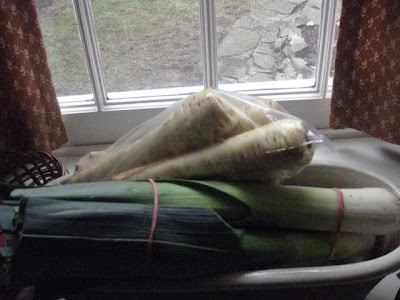 leeks and parsnips. I passed this forsythia bush on my way there. 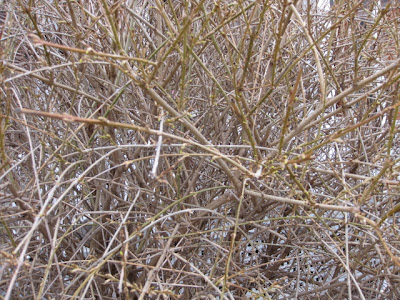 As you can see, it's only in the earliest stages of budding. In a normal year, it would be done and almost into full leaf. Sigh. No rhubarb in sight for a while, I guess.
Posted by Liz at 7:55 AM