Getting It Down in Writing

Knitting is so much more fun than writing patterns. That's my excuse for being so slow about getting what I've knitted into pattern format. Lately, I've been thinking a lot about what format works best for writing patterns. My preference is for patterns written in Elizabeth Zimmerman's "general recipe" style. I would rather be told to "centre the stitch pattern in the back and front sections" than be given explicit instructions about how many stitches to knit before starting at point "X" on a graph. For one thing, detailed instructions increase the odds of pattern-writing errors. However, even EZ was forced to acknowledge that many knitters want a "blind followers" version.
I do my best thinking when I'm out walking, so while I was pondering all of this today, I wandered off east from my front door toward RMC (the Royal Military College). Since I usually strike west, that in itself was an indication that I was in the mood to think in fresh ways. 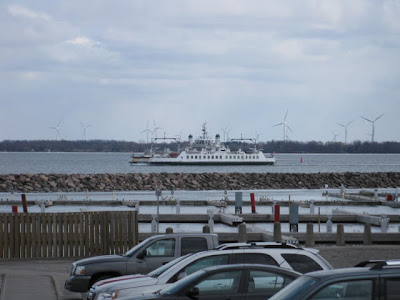 The Wolfe Island ferry was coming in as I walked down Ontario Street, and I stopped at the bottom of my street to admire the bulbs coming up in the garden of the Frontenac Club Inn.

I'm working on writing up the pattern for my new crossover cardi (still unnamed) and I'm wondering how knitters would feel about a pattern with a little less detail than is customary, but still a little more than the rough outline frequently offered by EZ. Something more than a general recipe, but with some room left for a little thinking and planning by the knitter. After all, knitting is supposed to be a creative activity, right?