Gorgeous, sunny March weather. Went to St. James this morning with our friends Ann and Steve from Ottawa, who were here for Steve's birthday. Their daughter, Leslie, who is studying engineering here at Queen's, came with them. After church, we drove up to Westport for a little shopping. I bought some nice pieces at "Chris Reynolds", a fave clothing store. Then, after some butter tarts, we watched the locals engage in the sport of "waterskipping". What is that you ask? It involves riding a snowmobile over the thawing lake at breakneck speed, then taking off over bits of open water and landing (hopefully) on the ice on the other side of the gap. Considering the fragile nature of the ice at this time of year, the weight of a snowmobile, and the temperature of the water, it seems like a death-defying act. These photos give some idea of what it's all about. 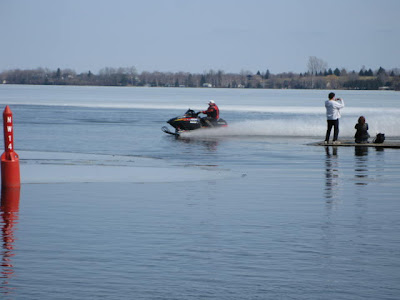 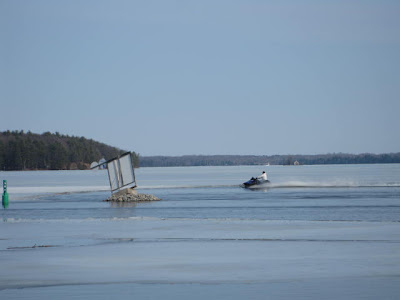 On our way up to Westport, we passed a lake with a throng of people gathered at the edge and some poor guy up to his neck in the water being hauled out by a rope. At the time, we couldn't figure out what it was all about. Once we'd seen what was going on at Westport, we knew. I suppose his expensive machine was somewhere underneath him at the bottom of the lake. The price of a few thrills, I guess.
Posted by Liz at 3:37 PM