Yesterday I decided to give Turbotax Online a try. In the past few years we've used accountants, because our tax situation in Bill's transition from the World Bank in Washington, DC back to Canada was a little complex. Now things have settled into a fairly straightforward path, and so it seemed a good time to take on the task ourselves and save the hefty accountants' fees. So, I opened an account, logged in, and began to enter our data. I took advantage of the company's online chat system to ask a technical question, and then it happened---when I went to log in again, I got an error message. I phoned the customer service number and got someone with a strong Indian accent on the line who, after about half an hour of trying, was unable to solve the problem. She eventually told me that my problem was being "escalated" and that I would receive an e-mail and a phone call when the problem was solved. Well, here I am 24 hours later and, after yet another phone call to wherever and another online chat, I've been told that it may take up to 5!!!! business days to fix my log-in problem. Five!!! Do you sense my frustration? My data is out there somewhere and I can't connect to it! And I have no idea what "escalated" means in this context.

All right, I'm taking a deep breath. We're having one of the best soups in the world for lunch--Deborah Madison's potato soup from here. Hard to believe something so divine comes from only a handful of simple ingredients. And I love how she says it's a great soup to make to "build up your soup confidence". I could say I've made it in anticipation of St. Patrick's Day, except that wouldn't be true. In spite of Bill's Irish ancestry, we don't really celebrate. I might make James Beard's Irish soda bread tomorrow, but that'll be about it.
I have something green to show, though. Here's the Hitchhiker Scarf on its recipient. 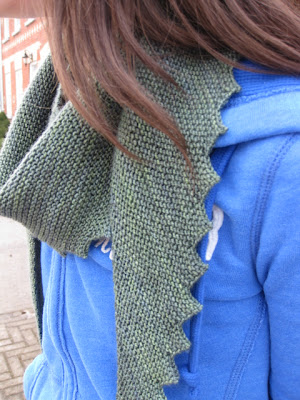 Now I'm off to "escalate" my knitting, that is, if this definition is accurate--"Become or cause to become more intense or serious."
Posted by Liz at 10:35 AM