For the last month, I've had a sort of on-again, off-again relationship with the idea of spinning. Note that I didn't say actual spinning. Yes, the idea has been intriguing me, but the reality I'd experienced never lived up to the idea. The idea piqued my interest enough, though, to send me to the internet for Abbey Franquemont's video version of her book Respect the Spindle. As they say, a video is worth a thousand words.
I followed Abbey's advice, and spent a lot of hours "parking and drafting". She recommends 2 or 3 weeks of practice at this activity, which breaks down the motions of drop spindle spinning into manageable components. She asserts on the video that if you practice for 30 minutes a day for a few weeks, suddenly it will all come together and you'll be spinning with relative ease. Well, guess what? It only took a few days. Yesterday it happened for me. It's magic. 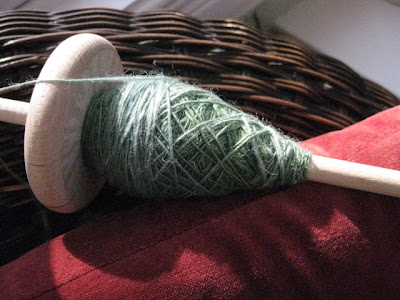 Now, does anyone know where I can get a nice high-whorl spindle with a notch? OK, and maybe a low-whorl spindle now that I think of it. I'm addicted.
Posted by Liz at 8:02 AM