A couple of weeks ago, the Globe and Mail ran a link to a ridiculously entertaining blog, "What's Different in Canada", a blog that is "a beginner's guide to the differences between the two most similar countries on earth." As someone who has spent significant time living on both sides of the border, I can tell you that the differences are also surprisingly significant in both tangible and intangible ways. However, for the purposes of this blog, the one that I encounter most has to do with the words "worsted weight". Never mind that "worsted" also refers to a method of spinning. Here, I'm talking about yarn weight as it pertains to stitch gauge.

In Canada, things are pretty straightforward. When a pattern published here suggests "worsted weight" yarn, it means yarn that knits up at 5 sts per inch, or 20 sts per 4 inches or (because we're metric here) 10 cm.
Examples: Patons Classic Wool, Ella Rae Classic, Cascade 220. I generally get this gauge with a US #7 / 4.5 mm needle. This is the gauge you would get in stocking stitch if you wanted to knit a sweater.

In the U.S., it's more complicated. I first realized this when I encountered a pattern for a sweater that called for worsted weight wool, but the gauge was 4 sts per inch. What??? Did the designer intend the fabric to be loose? No. The suggested yarn was in fact way chunkier than what I had learned to think of as worsted. It turns out that "worsted weight" can encompass a fairly wide range of weights south of the border. I've seen it cover anything from 4 sts per inch through 4 1/2 sts per inch (I'd call this aran) to 5.5 sts per inch (what I normally think of as DK, or double knitting weight). Sometimes, you'll see the terms "heavy worsted" for the first and "light worsted" for the last.
Examples: Peace Fleece Worsted (I'd go so far as to call this chunky), Brooklyn Tweed's Shelter  (I'd call it aran), and Berocco's Ultra Alpaca (a true worsted, from the Canadian point of view).

On top of this, don't forget that there are some yarns that seem to work well at more than one gauge, Brooklyn Tweed's Shelter being a perfect example. It's part of why it's such a marvelous wool.

And also don't forget that sometimes we choose to knit certain items, like socks or mitts, at a firmer gauge than normal, and sometimes we want a fabric to be loose and drapey. That's what I did with my Perth Cardi, 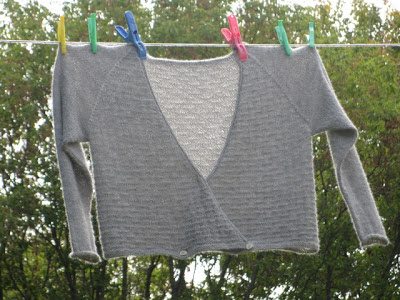 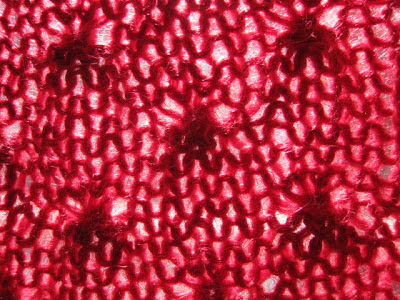 Does this help clear things up?
Posted by Liz at 8:26 AM