Claire's Gloves: In Which I Find a Use for the Magic Loop

Now that I'm over (more or less) my difficulties with the 21st-century take on the handknit bits in Outlander, I've decided to jump on the bandwagon and design what I think would be the perfect gloves for 18th-century Claire. These will be proper gloves, with full fingers, because eventually it's going to get cold, as in wintry cold, in Scotland. There might be a matching cowl in the offing, but that's down the road.
I'm holding off on a yarn decision for now and concentrating on a more basic design decision: bottom up, or top down. I've done both over the decades, but recently have been making multiple pairs of Robin Melanson's "Strata" for myself and Isabel. I say "multiple" because, unfortunately, our gloves have a habit of going missing. (My first pair were actually stolen when we had a break-in at a previous house. I was more upset at losing my handknitted alpaca and silk gloves than my credit cards!) "Stata" is a great basic glove pattern, but I have to admit to hating the part where I knit the fingers on dpns. It's fiddly, and best done when one feels full to the brim with patience.
Another take on top-down gloves is Meg Swansen's I-cord finger gauntlets. These are definitely ingenious, but I've never been really happy with the look of them--the tension where the ladder at the back of the I-cord is converted to an extra stitch isn't quite perfect enough in my version.
So, this afternoon I played around with a third option--top-down fingers begun with Judy's Magic Cast-On using a magic loop. First, I reviewed Cat Bordhi's hilarious video on how to do the cast on. There might have been some laughing out loud as she pretended to be a parrot in the jungle. Unfortunately, Bill was in the room at the time. I ignored any snarky remarks.
At first I tried the cast-on with dpns. Way too squinchy. Then I tried two circulars, as Cat suggested. Better. Then I caved and tried the magic loop. Perfect. 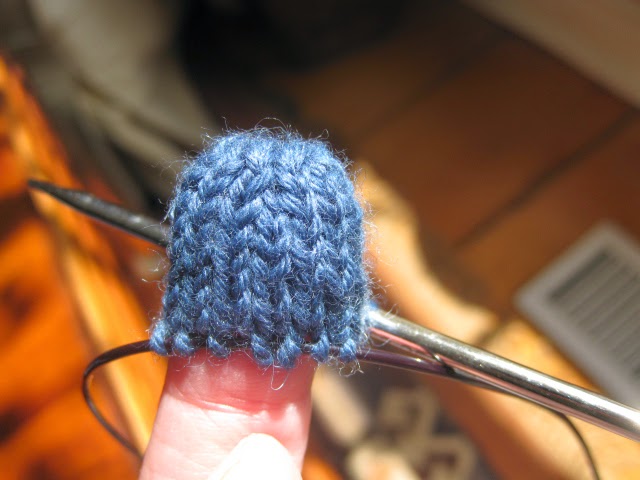 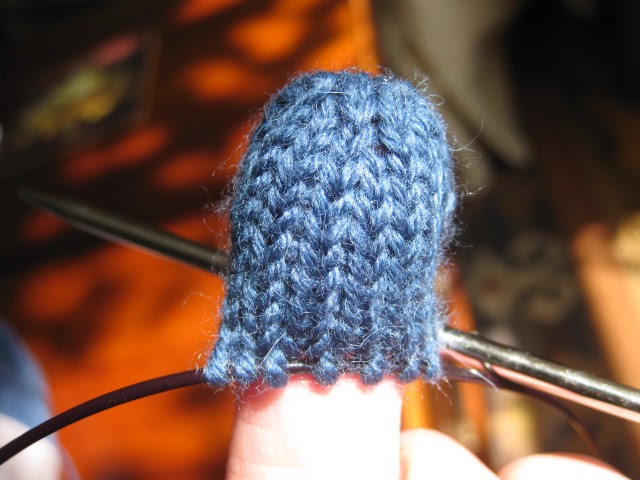 On my first try, I cast on all the finger stitches at once and, of course, ended up with a squarish fingertip. Then I wised up and cast on about 60% of the total, increasing in two subsequent rounds to the final number. Voila. A nicely tapered tip. Now on to some sketches of the gloves. Garter stitch cuffs? I-cord buttonholes? Stay tuned...
Posted by Liz at 2:05 PM