In my determination to avoid anything that smacks of serious preparation for Christmas, I've only just this day-before-Christmas (you can't call the morning Christmas Eve) decided what we'll eat tomorrow, and taken the following steps toward readiness.

1. I'm an early riser, at least compared to the rest of my household, so I woke up at about 5:30 am and spent an hour and a half knitting on the right sleeve of James' Modern Gansey. The decreasing is done, so it's just a matter now of keeping on going until it fits him. (Decision point: do I attempt to knit his initials into the lower sleeve, or not? Most likely I'll attempt; not clear whether I'll succeed.) 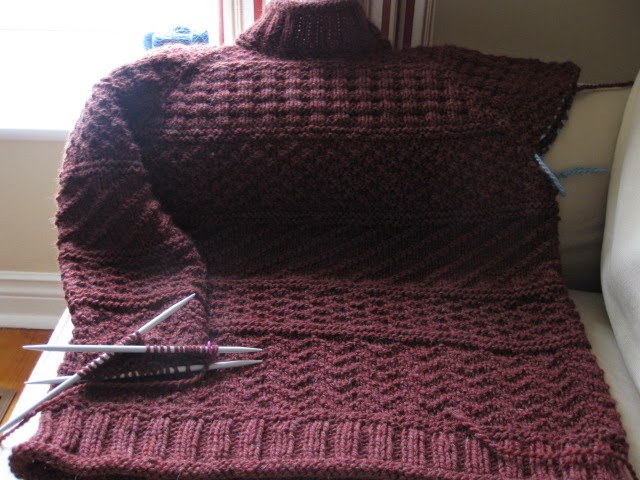 I think the purpose of the knitting was to steel myself for the rest of the day, when, no matter how hard I try, a little bit of craziness will inevitably creep in.

2. While knitting and drinking the better part of a pot of tea, I decided on a Christmas dinner menu, and wrote down a list of items to be picked up. The programme goes like this:

3. At 9:05 I called Bearances and asked the butcher if he had any large capons or small turkeys unaccounted for. I had a small, 9-lb turkey put on hold with my name on it. It's a fresh local turkey and I know it will be moist and have delicious flavour, unlike the supermarket variety.

4. At 11:00 I was back home with the turkey and my other essentials and ready for a foray downtown on foot to grab a few last-minute gifts. Best not to buy the chocolate treats until the day before Xmas--I have no willpower when it comes to chocolate, and odds are I will eat any that's sitting around too long. I walked past St. George's Cathedral on the way, here seen from the back. That's the church hall on the left. 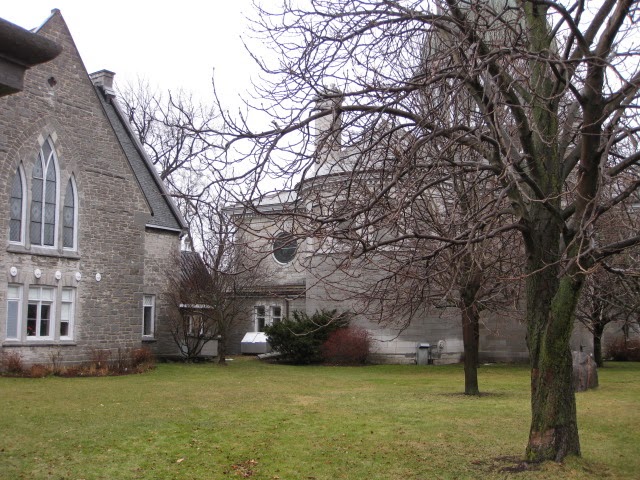 It was 10C when I woke up ( strangely warm for here) and we're in for some heavy winds between now and Christmas--90km/hr by tomorrow. No snow, which feels a bit odd, but I'm OK with it. Have a happy holiday!
P.S. Many thanks to all the knitters who purchased patterns and sent them through Ravelry as gifts. I'll be doing some of that too this afternoon.