Bill is approaching his 70th birthday in 10 days. He is old enough (unlike me) to remember the 1950s. In particular, he remembers being taken by his mum to movie matinees while his older sister was at school. I assume these were his mother's "getaways" from the drudgery of 1950s housewifery. He seems to have especially vivid memories of Audrey Hepburn movies. Really, who wouldn't have wonderful memories of such strikingly visual movies as "Funny Face".
Unfortunately for me, Bill's application of his movie memories to some of my favourite outfits is less than flattering.  Of one of my York Pinafores (my semi-uniform), he recently remarked, "It's rather like the outfit Audrey Hepburn wore when she was working in the bookstore in Funny Face". That's when she was supposedly frumpy (as if she ever could be that). I took it in stride, and pointed out that most real women would rather spend their time in flat shoes and jumpers than stiletto heels and wasp waists. I also showed him, as proof that some people thought Audrey's bookshop outfit was stylish, the movie-inspired "Bookworm Vest" from Cheryl Oberle's book "Folk Vests".

Twenty years ago, when I was an avid shopper of Flax clothing at DC's "Catch Can" I had a favourite linen outfit which I usually wore with a much-too-expensive straw hat. On an outing to Dumbarton Oaks gardens in Georgetown on a steamy summer afternoon with two small children in tow, Bill looked at me and remarked, "That outfit makes me think of Julie Andrews in her straw hat on her way to the Von Trapp family." He did not mean it as a compliment.
The thing is, in both of these latter two cases, I was actually pleased to be compared to Audrey Hepburn or Julie Andrews in their "pre-glamourous" phases. I thought those outfits were romantic and fun (and comfortable to boot). I think Bill has never got over some sort of 1950s concept of how women ought to look. I suspect a certain Mr. Trump is caught in the same time warp.
Even when movie memories aren't evoked, Bill is still the master of the back-handed compliment. While out for an evening walk a few days ago he remarked on how much he liked the drape and 1960s silhouette of my new Wiksten Shift Dress (see previous post). Then he sought for the right words to describe the colour. "It's like dried blood", he said. Now I'm pondering what I could possibly give him as a birthday gift in that same colour...

On an unrelated note, today I roasted some tomatoes and garlic with olive oil, balsamic vinegar, salt, pepper, and thyme, 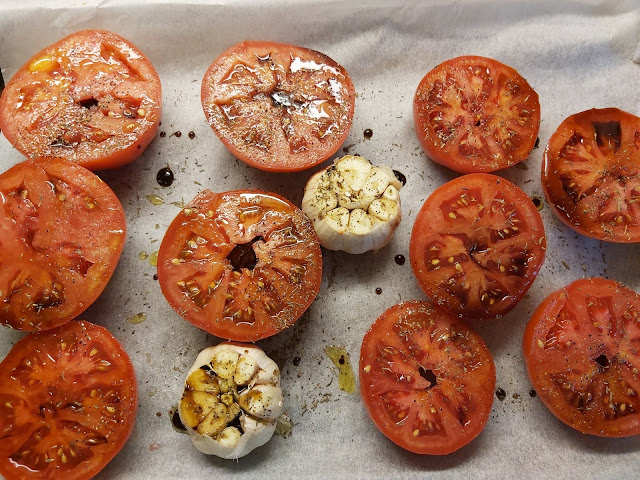 and turned it all into the most heavenly soup. I only make this recipe when conditions are perfect -- ripe, juicy local tomatoes + reasonably cool weather so that the house doesn't become unbearably hot. Divinely delicious!
Posted by Liz at 5:29 PM