Got up at the crack of dawn and drove James to the bus terminal so he could visit friends in Ottawa and attend the party with Kate and William on Parliament Hill. I don't think that, even when I was his age, standing in a crowd of half a million people on a blistering hot day would have had any appeal (even with the enticement of royalty). On the way, he asked about the words to God Save the Queen, which we used to sing in school every day when I was a kid. James says that every time he hears it, he hears the words to the American version--he may be Canadian, but he grew up in Washington, DC and sang for several years as a chorister at the National Cathedral. Isabel, having been born while we were in DC, has dual citizenship. Globalization at the family level, I guess.
Speaking of being Canadian, today's Globe and Mail has an updated list of what it means to be a Canadian in 2011. The list is here.
For my own Canada Day activity, I walked with Isabel over to Bellevue House, the Kingston home of Canada's first Prime Minister, Sir John A. Macdonald. Open house today with food, costumes, speeches, etc. The house is one of many 1840's era homes here in the "Italian" style. (Kingston was briefly the capital of Canada in the 1840s.)

Isabel and I did a tour of the kitchen garden. We took a quiz and managed to name most of the plants on the list. I won a keychain. 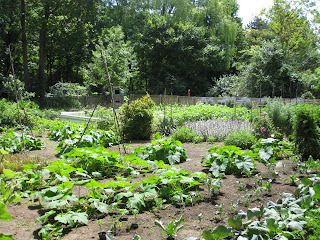 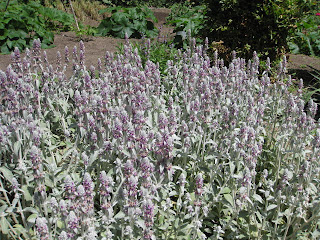 We skipped the house tour. We've been through many times. It was hot (for Kingston), so we walked home by the lakefront so we could catch the cool breeze off the water. 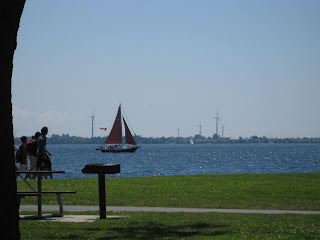 Tonight we'll go down to the harbour to see the fireworks. Happy Canada Day.
Posted by Liz at 10:46 AM