Elizabeth Zimmermann was right; a hat, knitted circularly, is the perfect first project. Most teachers of knitting shy away from teaching beginners on circulars, but that is false thinking in my view. It's also quite ridiculous that most beginner hat patterns are knitted flat and then seamed. Of all garments, hats are the ones that most demand a circular treatment. Our heads are round (mostly)! And it's useful for beginners to begin thinking in three dimensions, rather than in two. The crown of a chunky hat also provides the perfect opportunity to become comfortable with double points.
Isabel took to circulars and dpns like a duck to water. Of course, she's seen me using them all her life and understood the concepts right away. In less than 24 hours, here's what she managed to produce: 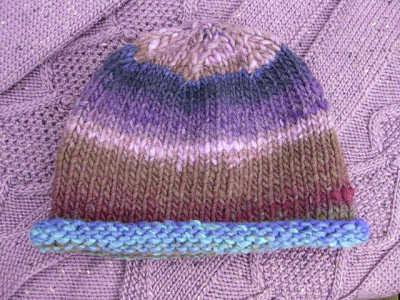 I'd like to show her in the hat, but my attempt to include her photo was rebuffed with a remark that she hadn't washed her hair yet today. Maybe later.
In any event, here's the simplest of simple patterns for anyone interested.
Simple Hat
to fit average woman

One ball Noro Hisuji or other bulky wool
Size US 11 (8 mm) 16 " circular needle
Size US 11 (8 mm) dpns
Notions: ring marker, pin-type marker, blunt large-eyed needle, sharp large-eyed needle.
Gauge: 11 sts/ 4" (10 cm) not critical--don't bother with a swatch; the hat will fit somebody!
Using US 11 (8 mm) 16" circ., CO 54 sts by the longtail method.
Join, being careful not to twist, place ring marker for beg of rnd, and knit every rnd until work meas 7" from beginning, uncurled.
Remove the ring marker and divide the sts among three dpns (18 sts ea). Use the pin marker to indicate the start of the rnd.
Dec for crown
Rnd 1: *k7, k2tog, rep from * to end of rnd.
Rnd 2: *k6, k2tog, rep from * to end of rnd.
Rnd 3: *k5, k2tog, rep from * to end of rnd.
Cont as est until only 6 sts remain in rnd.
Cut yarn, leaving about 8". Use blunt needle to draw the yarn through the remaining sts while removing them from the needles. Draw the yarn through the sts a second time to secure, then plunge the yarn through the centre into the hat. Secure by making a st through the centre, then switch to the sharp-eyed needle and weave the end in on the WS by going diagonally in two directions. Weave in the beginning end on the RS (which will curl up to cover it), taking care to make the join at the start of the work as invisible as possible. Soak the hat in cold water (with Eucalan if desired), gently squeeze, wrap in a towel and jump on it a few times, then mold to shape on a dry towel and let air dry.
Note on joining in new yarn ends
The Noro yarn is a single ply wool that spit splices perfectly. When Isabel encountered a knot in the yarn, I showed her how to do this to avoid having any ends to weave in in the body of the work.
Posted by Liz at 6:30 AM