One of my pet peeves is sleeveless sweaters (vests, in Canadian English) with "wings", i.e. shoulders that stick out. Early on in my knitting career, I undertook to knit an Alice Starmore fair isle vest for Yarns International, my LYS. While I loved the design in general, I was disappointed when I cast off the armholes and discovered that the corrugated ribbing at the tops of the shoulders stuck straight out from my gently sloping shoulders. Note that this was a fairly early Starmore design, and I haven't seen evidence of this sort of lack of shaping in subsequent photos of her designs. Not long after, I came across Meg Swanson's video based on her fair isle vest from Woolgathering #54 (later published in the book Meg Swansen's Knitting), in which she explains how to avoid the wing problem.
It's not difficult. After picking up stitches around the armhole (I do it at a ratio of 3 stitches for every 4 rows on vertical edges and 1 for 1 on diagonals), in the very next round, you simply work some decreases on both vertical edges and again at the top of the shoulder. The number of increases will vary with size and gauge; if your pattern doesn't specify how many, then experiment. It's worth it! See? 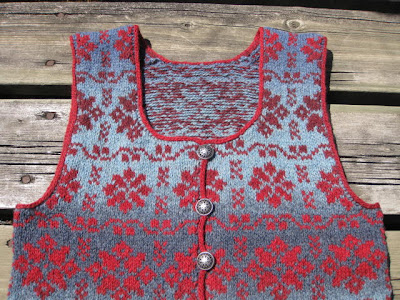 Best of all, you get the illusion that you've shaped the top of the shoulder to create a slope without having to do all the work--how can you not like that?
Now, I'm going to take a moment to show off Isabel's first FO. It's "maree", from the Fall 2011 issue of Twist Collective. 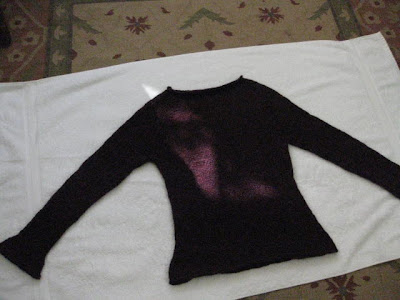 What a perfect first sweater, with no borders to pick up! Pretty much my only input in this project was to show Isabel how to eliminate underarm gaps when working from the top down. I wish my first sweater project had turned out this well. Maybe I can talk her into some photos so you can see how beautifully she modified the length to produce a lovely form-fitting result. I'm ridiculously proud.
Posted by Liz at 9:41 AM