Time for a little break while I catch my breath from some pattern writing. I'm playing with Robin Hansen's pattern for New Brunswick "stuffed" mitts from her new book, Ultimate Mittens. Bill grew up in Saint John, New Brunswick, so there's a bit of a connection, although when he was a boy this type of mitt was probably only known in Newfoundland. I'm using Ella Rae Classic Heather in Colour 111 and Briggs and Little's undyed pencil roving, which comes in a huge wheel (enough for a lifetime of stuffed mitts). Robin's book is something of a reprise of her previous mitten books, but in a much slicker package and with some new material. If you're not a veteran mitten knitter, be prepared to sort out some of the details of these patterns on your own. They're not written out in the same detailed fashion you find in knitting magazines (but not as lacking in detail as Elizabeth Zimmermann's 'recipes').
After some preliminary messing around, I found that I needed to go down a needle size to produce the proper gauge. This method of "stuffing" is easier than inserting thrums in the traditional way and makes nice little hearts all over the mitten. 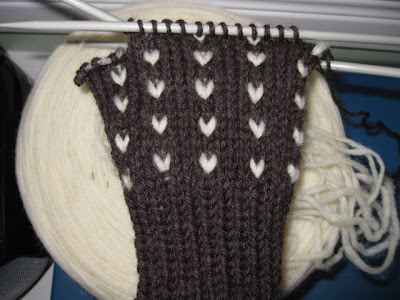 Here's the inside, showing the fleecy lining. 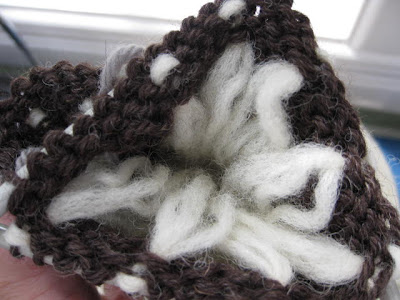 The roving is so "sticky", for lack of a better word, that it's already felting together. It's hard to describe the thick cushiness of the fabric, but if you live in a part of the world where a single layer of knitted fabric doesn't cut it in January, you might want to give these a try.
P.S. What's with NBC? We've noticed that there's a dearth of live olympic coverage from the U.S. and what's shown in the evenings is heavily edited (not to mention filled with ads). Somehow, it seems disrespectful to the audience. So glad we have the option of watching CTV's live coverage--much more thrilling to see Bolt win the 100 metres as he actually does it!
Posted by Liz at 9:48 AM