An Oldie But Goodie

On our first night on the road last week, Janie and I stayed at the Grandview Country Lodge and Store in Randolph, New Hampshire. We arrived just after the store closed, but the proprietress nevertheless was happy to let us browse through her considerable collection of yarns and patterns. The store is a little like an archeological dig, with layers of stuff in baskets, in bins, and in nooks and crannies. There was a whole wall of Bartlettyarns, the wool from Maine made famous by Elizabeth Zimmermann (her beloved "Sheepswool"). There were patterns long out of print, like Patternworks "Thermal Vest" from 1980 (Janie bought a photocopy of it). And there was a basket of Carol Anderson's Cottage Creations booklets, including the "Babies and Bears" jacket and the "Babies and Bears for Grownups" pattern.
I've made a bunch of the baby version and years ago, I made a grownup version which I wore until it died and all I could do was salvage the buttons. I loved that sweater. So, when I saw the booklet again I knew that the first thing I would do when I got home would be to start a new version. I don't often knit other people's patterns since for quite a while the fun for me is making up and working out my own designs, but this is an old favourite. My booklet still has all my notes from when I last made it. After checking out my stash I cast on with Naturally's Aran Tweed (95% merino, 5% wool knops), then realized that I might run a bit short. So, yesterday I took the car up to Janie H.'s and picked out some of Elsebeth Lavold's Twice Tweed to stretch my yardage. I'm using the latter for the garter stitch portions of the body. 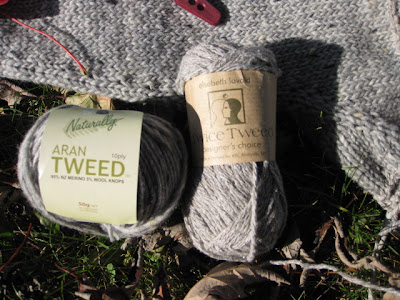 Here's where I am so far: 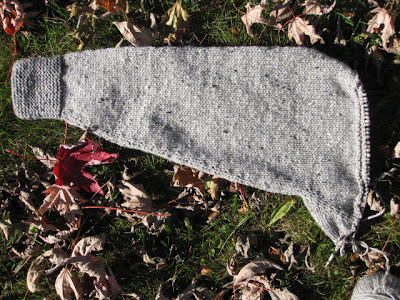 You can see where the increases are starting to explode the sleeve into the body. The Twice Tweed recycled yarn is just starting to show at right.
While at Janie's I scouted out her button collection for the perfect go-together. 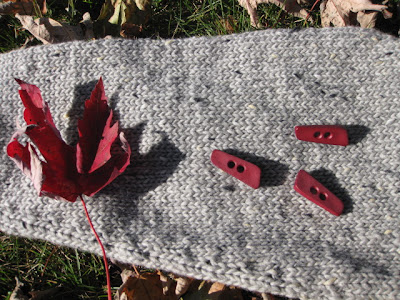 This pattern is so much fun!