Spent Sunday playing with Barbara Walker's "Twin Trees" chart from her Third Treasury of Knitting Patterns. I tried it out in Green Mountain Spinnery's "Simply Fine" in natural variegated shades. My idea was that the shades would lighten as the pattern progressed toward the top of the chart, but unfortunately the shading didn't progress fast enough and there is only some slight change in shade. 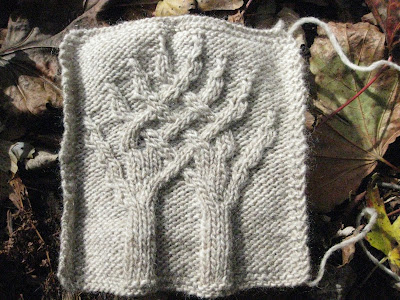 If I try again, I'll weigh my sample and then wind off a similar weight from the skein, aiming for a length with more colour variation.
The other aspect of the experiment which I'd correct in future is that, as charted, the little square isn't "square" since the intense cabling in the centre draws that portion of the piece in. To compensate, I think I'd cast on about 3 fewer stitches, then increase further on and do the same in reverse toward the end.
Don't you think this would make a stunning inset into the upper back of a sweater? Hmm...
Yesterday (Monday), I tried out Ysolda's solution to the loose knit stitch at the transition from knit to purl in ribbing. She describes both the problem and her solution in her new book, "Little Red in the City".  Essentially, she suggests purling as in Eastern knitting, where the yarn is wound around the needle in the reverse direction from where it would normally go. This causes the yarn to travel less distance in the knit/purl transition, so that the ugly loose stitches disappear. (Don't forget to knit into the back of these Eastern purled stitches on the succeeding row.) It works beautifully, and your hands and brain get used to the new movements very quickly. 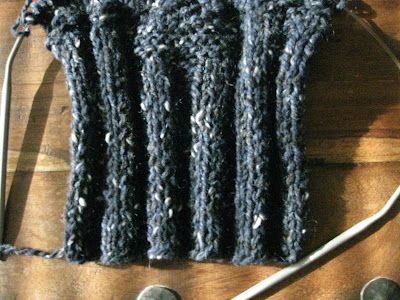