So much for clear blue skies and warm sunshine. It's been raining as hard as it can since this morning and it's not supposed to let up until this evening. No hope for some nice photos of my Fibonacci Neckerchief. The weather is definitely not cooperating. The pattern is written up and all I need are some nice photos before I can post it on Ravelry. Here's the blurb from the introduction:


This simple scarf/shawlette is not named after a contemporary Italian designer, but rather after a 13th century mathematician, in whose book a particular sequence of numbers appeared for the first time in the West (the origin of the sequence was earlier in India). The first two numbers in the Fibonacci sequence are 0 and 1, and each subsequent number is the sum of the previous two. In this scarf, the garter stitch ridges appear in the same order: 0, 1, 1, 2, 3, 5, 8, 13. One could keep going, if a larger shawl were desired.
This is a piece both easy to knit, and useful as a head covering, neckerchief, or shawl. The crescent shape allows it to drape attractively around the shoulders, while the Shetland lace bind off (similar to a 2-stitch I-cord) gives the long outer edge just enough heft. I used a hand-dyed merino/mohair blend, but you could try it out in a Shetland-type wool such as Kauni or Brooklyn Tweed’s Loft, or a handspun luxury fibre.

I did manage to get a few close-up indoor photos to whet your appetite. 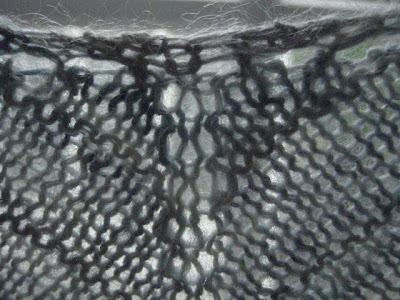 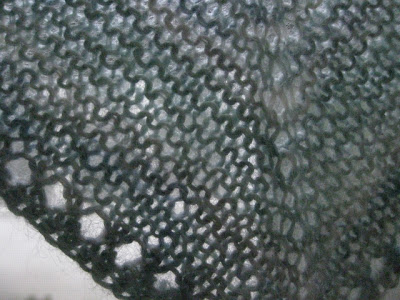 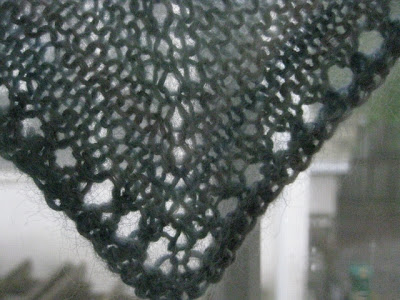 Until the sun shines, that's all there is.