Spur of the Moment

After I mentioned in my last post that I was toying with the idea of making a scarf, my brain just wouldn't let that thought go. I've been thinking over the summer of making an elongated triangle scarf/shawl, with a slight crescent shape, that would fit nicely into the neckline of various other things I own, so this morning I got around to starting. First I looked at some of my favourite scarf/shawl patterns on Ravelry, like Stephen West's Boneyard Shawl, The Age of Brass and Steam Kerchief, Miss Potter by Laura Aylor, and BT's Romney Kerchief. None of these, however, was quite what I wanted, so I did what I usually do in such circumstances and devised something of my own.
I wanted garter stitch ridges, but not too many. I wanted a stitch pattern that would be evolving, not static. I realized that I wanted to base the pattern on a Fibonacci sequence in this lovely pale mohair from Fleece Artist (not the pink from yesterday, but this instead). 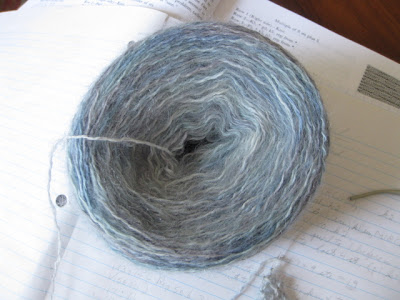 So, after some mucking around with different sized needles, I got going. 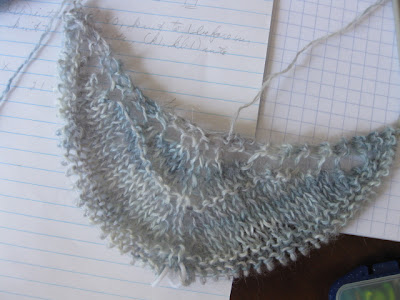 This might be one of those things you don't put down until it's done. Hope to have it done by the end of the weekend. Yippee!
Posted by Liz at 10:20 AM